Christy Maynard, Umpqua Bank Angels Camp Store Manager and Board member of CCF along with Diana Scaparro-Cammisa, Umpqua Bank San Andreas Store Manager, state: “Community is at the heart of all we do at Umpqua Bank and we are proud to make a contribution to CCF.  We know this will promote wellness and stability in our Calaveras County communities, specifically in regards to youth development, education and the arts.”  Umpqua has additional branches in Copperopolis, and Valley Springs.

CCF distributes funds, like this donation from Umpqua Bank, during its annual competitive grant period. During the most recent giving, more than $72,000 was distributed. Focusing specifically on two initiatives, Aging in Place for Seniors and Support for Learning Science, Technology, Engineering and Math (STEM), fourteen groups were awarded monetary awards.  Partnerships with loyal area businesses allows CCF to continue to fund many worthwhile causes.

As a 501© 3 non-profit organization, CCF serves Calaveras County charitable causes exclusively. Since it’s inception in 2000, the Foundation has distributed more than $750,000 in competitive grants, scholarships and assistance. 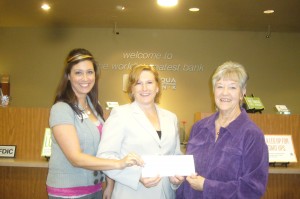