Terry Beaudoin and Gil Valtierra were recently welcomed to the Calaveras Community Foundation (CCF) Board of Directors.

The Beaudoin family moved to Valley Springs in 1986. Since then Terry has been involved in several local fund raising efforts and was on the founding board of the “Kids Place” after school day care which is still running at Valley Springs Elementary. He is a former Grand Knight for the Knights of Columbus. Terry and wife Sharon raised their 2 children in the Calaveras school system and have developed a great love for this county.

Working for 35 years in the telecommunications industry, Terry held the titles of National Sales Manager, Client Executive and Senior Director of Engineering. He traveled extensively nationally and internationally, retiring December 2012 from Sprint.

Terry shares, “This has been a great place to live and raise our family for almost 30 years, the Foundation is an excellent resource for the community and I am flattered to become a part of it.”

Gil Valtierra moved to Calaveras County in 2005 to take a position with Rite of Passage in San Andreas as head football coach and athletic director. He brought with him 18 years of sales and marketing experience and 10 years of football coaching experience. He now utilizes these skills as a banker at Wells Fargo Bank covering branches in Jackson, Plymouth, and San Andreas. Gil has also been coaching football at Calaveras High School for the past 5 years as an assistant to the varsity team and this year will add head JV football coach to his responsibilities.

Gil is married and has two daughters, one of whom is a graduate of Calaveras High and now a college student in Chico, CA. The other is a junior at Calaveras High who plays soccer and volleyball. Gil and his family live in San Andreas and absolutely love living in Calaveras County. Gil says; “Whether it’s in the bank helping people or on the field helping young men, I love the feeling I get when I make a positive difference in someone’s life. Calaveras Community Foundation has been making a positive difference in people’s lives for over a decade and I’m looking forward to being a part of a great team of people that have the same values.”

Calaveras Community Foundation is very proud of what has been accomplished since its founding in 2000.  As of December 31, 2012, more than $680,000 has been distributed in scholarships, grants and assistance. Students have been helped to pursue their educational dreams. Other funds have gone to support a wide range of projects to improve the quality of life throughout this county. 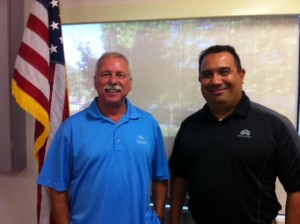