Celebrating 20 Years of Serving the Community

Twenty years ago, it all started with a wish, a wish to help charitable foundations and non-profits that serve Calaveras residents in their own individual missions. This wish was a dream the heart makes, as the old song says, and this dream became a reality when two local businesswomen from West Point stepped out, putting their own money forward to give their wish wings to fly.

It was 1999, the Star Wars reboot was just hitting the theaters joined by Toy Story 2, Britney Spears and the Backstreet Boys topped the charts, every child had to have a Furby and the must read was Harry Potter and the Prisoner of Azkaban. And, in the far corner of Calaveras County, Genna Hurst and Beth Childs took a look around their community and saw a need, the need to help charitable groups and non-profits with their own projects throughout the County.

“I wanted to give to the needy,” Hurst told the Union Democrat at that time. “I believe in this. I believe it’s a wonderful thing.” 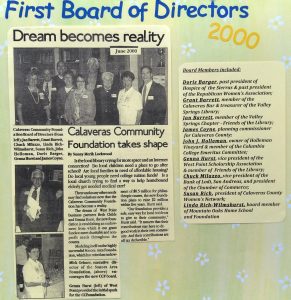 Now, 20 years on, the Foundation is still served by an all volunteer board and has become the largest, general purpose charitable organization in Calaveras County. It has given over $2.4 million to organizations that serve the Calaveras community through competitive grants, scholarship funds and directed funds.

The Foundation has raised funds to help its philanthropic cause in a variety of ways through the years, by sponsoring partnerships like Chairs for Charity, being the recipient of events like golf tournaments, as well as being a place where those who want to make charitable donations can give their money knowing that it will go back into the Calaveras community. 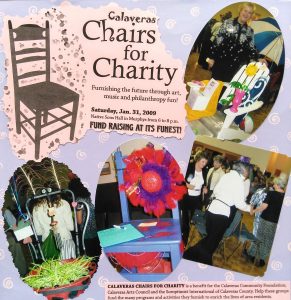 “The Foundation focuses its attention on giving within the community,” said past Board President John Holleman to the Union Democrat in 2002. “It’s an advantage to people who want to make charitable donations. They have some assurances that everything they give will stay in the county.”

In doing so, the current Board members desire is to continue and expand the dream of the Foundation’s founders two decades ago.

“We are very proud of what the Calaveras Community Foundation has accomplished in its first 20 years. We want to build on those accomplishments and continue to be a supportive bridge to financially help non-profit organizations in our County fulfill their missions, to help young people pay for their secondary education or training and start on their paths to a brighter future through scholarship assistance, and to help our donors who have set up donor advised funds make their visions of helping Calaveras County a reality,” she said.

“In doing this,” Kangeter continued. “We honor the dream of Genna Hurst and Beth Childs, as well as all those who have served on the Calaveras Community Foundation Board in the past 20 years, and that dream, in a nutshell, is to improve life and increase opportunities for our county residents.”