The Beth E. Childs/ Genna Hurst Renewable Scholarship administered by the Calaveras Community Foundation was presented during the awards night at Calaveras High School in late May. The 2017 scholarship committee selected Jillian Salvetti-Baker as the recipient. The Childs/Hurst scholarship is a 4-year $4,000 renewable scholarship awarded annually to a graduating student residing in the West Point/Wilseyville area.

Jillian, who resides in West Point, has consistently maintained a 3.96 average GPA through her four years at Calaveras High School. Her career goal is to become a veterinarian and specialize in exotic animals. Working at the San Francisco or Oakland zoo would be a dream come true for Jillian. She plans to attend Diablo Valley College to achieve her collegiate prerequisites then transfer to UC Davis where she will pursue her doctorate in veterinary medicine.

Jillian has been involved in California Scholarship Federation for 4 years & is now serving as Vice President. President of Choir Club, Tri-M Music Honors Society, Vice-President of MECHA club, and founder and President of Synergy, fills Jillian’s spare time. She has earned many awards, plays guitar & sings and has participated in Calaveras Has Talent competitions and was recently selected as Miss Calaveras 2017. She in involved in FNL (Friday Night Live) Leadership and Mentoring. 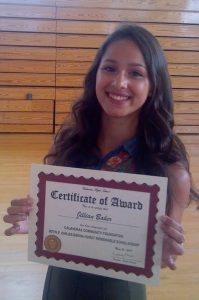 Jillian has volunteered at her local community center, Blue Mountain Coalition for Youth and Families (BMCYF), for the past 8 years. Here she helps serve free community dinners, performs at events, hosts Sunday brunches and helps wherever she is needed. She believes in “giving back.”