Diana Scaparro-Cammisa, Umpqua Bank San Andreas Store Manager, states: “Community is at the heart of all we do at Umpqua Bank and we are proud to make a contribution of $750.00 to CCF.  We know this will promote wellness and stability in our Calaveras County communities, specifically in regards to youth development, education and the arts.”  Umpqua has additional branches in Angels Camp, Copperopolis, and Valley Springs.

CCF distributes funds, like this donation, during its annual grant-giving period just completed for 2012. Nearly $48,000 was distributed during this year’s grant period.  Community groups focusing on youth, fire safety, theatre, music, special needs children, history, art, food pantries and much more were recipients of 2012’s grants. Incorporated in 2000, the Foundation has provided more than $650,000 in competitive grants, scholarships and assistance during that period.

As a 501© 3 non-profit organization, CCF serves Calaveras County charitable causes exclusively. Partnerships with both many loyal individual donors and area businesses allow CCF to touch more and more lives through grants and scholarships. Funds given in 2012 were made possible, in no small part, by continued donations from Jackson Rancheria Casino, Sierra Pacific Industries, Save Mart, Pacific Gas and Electric Company, and the Federlein Family Fund at the San Francisco Foundation. 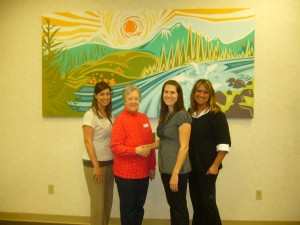